Bitcoin (BTC) represented on Ethereum’s own blockchain has been growing. In fact, the on-chain BTC value on Ethereum is close to surpassing Lightning Network.

Lightning Network has been hyped by the Bitcoin community for years now, but we’re still a long way away from it being rolled out for mass adoption. In fact, adoption of Lightning Network is currently so marginal that even wrapped BTC (WBTC) on Ethereum’s network will soon be worth more. 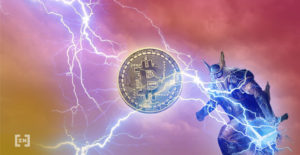 Wrapped Bitcoin (WBTC) has been growing steadily on Ethereum. The positive development allows for more cross-chain communication and is a core step toward integrating Ethereum’s smart contract specialty with Bitcoin’s secure blockchain database.

According to The Crypto Lark (@TheCryptoLark), the amount of WBTC locked on Ethereum’s smart contracts now totals some $7.8M. By contrast, Lightning Network also has $7.8M in BTC on its network despite being ‘in development’ since 2015.

Wrapped #bitcoin on #ethereum is about to overtake the $btc lightning network, no surprise there really! Bitcoin on Ethereum is way more useful, you can access a range of useful defi products that simply DO NOT exist on Bitcoin. pic.twitter.com/ZPB0W2nZ8b

Wrapped Bitcoin (WBTC) launched in February 2019. It functions much like a stablecoin pegged one-to-one to Bitcoin (BTC). The project was initiated by BitGo in collaboration with Kyber Network (KNC) and Republic Protocol (REN), as reported BeInCrypto when it was first announced.

WBTC is ultimately part of the greater movement on Ethereum toward what’s called decentralized finance (DeFi). Ethereum has dominated this fast-growing sector and now has over $1B is locked in DeFi-related contracts on the network. The growth has been nothing short of ‘parabolic,’ with growth expected to hit another 130% this year. The rise of DeFi on Ethereum has left other competitors like TRON (TRX) in the dust. It seems unlikely that any other smart contract network can catch up at this point.

DeFi still remains controversial, however, and has been subject to criticism. For example, a smart contract exploit last month saw 1,1,93 ETH stolen, which has caused concerns over security. Litecoin founder Charlie Lee has also criticized DeFi for being “decentralization theater,” although he received heat for it on Twitter – many considered it to be a cynical attack due to Litecoin (LTC) fading in relevance.

With WBTC now representing $7.8M in value on par with Lightning Network, Ethereum seems set to break further records in 2020.

Some rather awkward footage of a recent Bitcoin conference has surfaced. The clip shows a recently fallen-from-grace Bitcoin OG called...